The best of South Africa

The best of South Africa 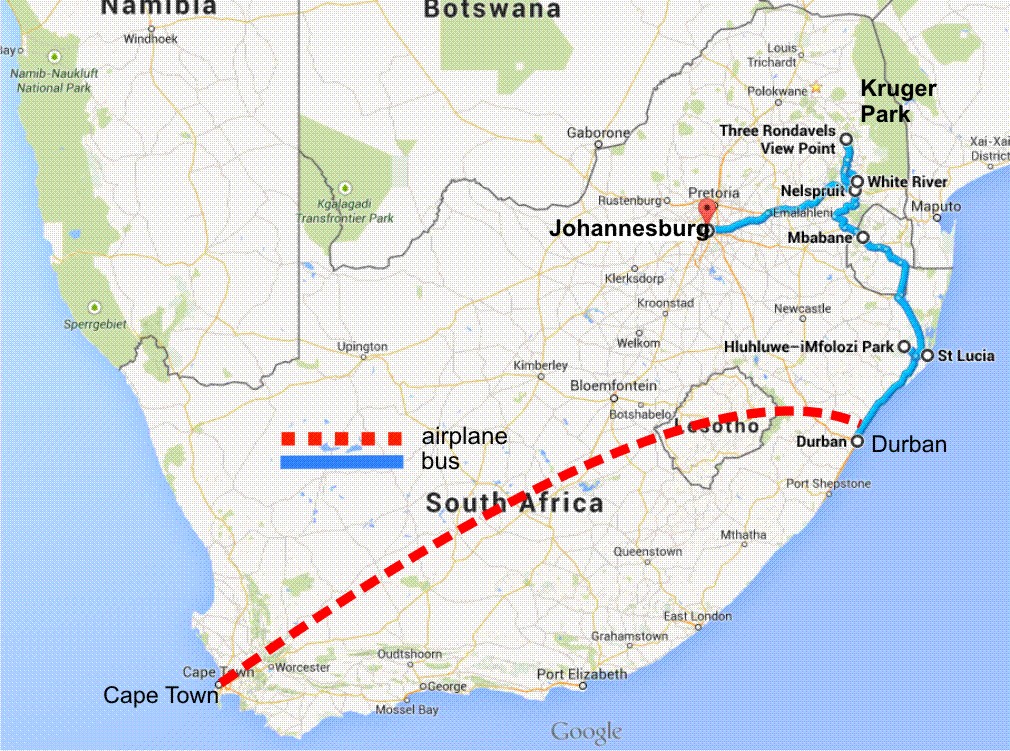 Day 1      Johannesburg – Soweto
Arrival into Johannesburg. Sightseeing of the city – drive through the oldest colonial districts of Johannesburg and Soweto, Houghton with Nelson Mandela’s house, Parktown and the city centre. In the afternoon drive to the Lesedi Cultural Village. A visit to the traditional Zulu, Ndebele, Basotho, Xhosa and Pedi homesteads is followed by energetic African dancing at sunset by the fire and the “Big African Feast”. Overnight in the hotel in Johannesburg.

Day 2       Lion Park – Pretoria – Kruger Park
In the morning we will visit a small private Lion park, where we will see a few families of lions as well as cheetah and african wild dogs. After a short safari opportunity to take photos with lion cubs and to feed a giraffe. Afterwards we will go to Pretoria – sightseeing of the city centre with its historical Church Square, the old Parliament Building, the Palace of Justice and the Paul Kruger’s statue. We also drive past the City Hall and Melrose House. Then we will leave the Gauteng province and drive towards Mpumalanga and Kruger Park. Arriving at the hotel near Park and time for relax next to the swimming pool.
Dinner and overnight at the lodge adjoining the Kruger Park.

Day 3       Kruger Park
Departure for a full day safari in the Kruger National Park – one of the largest and best game reserves in Africa. The area covering almost 2 million hectares is home to an impressive number of species (almost 150 mammals, more than 500 birds, and 100 reptiles) among them the famous “Big Five”: rhino, elephant, leopard, buffalo and lion.
Dinner and overnight at the lodge adjoining the Kruger Park.

Day  4      Panorama Route
Departure towards picturesque Panorama Route, offering one of the most stunning scenery of the surrounding area. Our first stop will be God’s Window, which owns its name to the dramatic views from various viewpoints overlooking the almost sheer 300 m drop into an indigenous forest-clad ravine.
Afterwards we continue north to see Bourke’s Luck Potholes, that have been carved out by water and stone falling down into Blyde River resulting in spectacular cylinders (up to six meters deep) with smooth and colourful rims. This natural feature marks the beginning of the Blyde River Canyon, which is he third largest canyon in the world, well known for its natural beauty and diversity of its flora and fauna. Nearby we visit another highlight of the Scenic Drive – Three Rondavels – three hut-shaped rock formations. On our way back we will also stop at the Lisbon Falls, which is the highest in the area. At the end of our journey we will have a break at Pilgrim’s Rest – a little charming town that was founded after the discovery of gold in the stream flowing through the valley. Presently Pilgrim’s Rest is like a living museum, preserved in the exact style of the gold rush period with many buildings unchanged for more than a century. Dinner and overnight at the 4* lodge adjoining the Kruger Park.

Day 5      Swaziland – St Lucia
After breakfast we depart towards the Kingdom of Swaziland: Stunning landscapes of mountains and valleys, forests and plains; plus wildlife reserves across the country that are home to The Big Five, and you have all that’s best about Africa in one small but perfectly formed and welcoming country.  In the afternoon we return to South Africa and arrive in St. Lucia, the centre of Greater St. Lucia Wetland Park which was proclaimed as the World Heritage Site in 1999. The park system extends from the Mozambique border for more than 220 km south to Cape St. Lucia and includes 5 different ecosystems: beautiful coral reefs and marine life, sub-tropical forests, highest vegetated dunes, freshwater lakes and savannah woodlands.
Dinner and overnight at the hotel in St Lucia.

Day 6       Hluhluwe – St Lucia
In the early morning we depart for a safari in Hluhluwe Game Reserve. The reserve is is considered to be the largest concentration of rhinos in the world. The combined Hluhluwe and Umfolozi are different than Kruger Park, very green and mountainous terrain situated between the rivers. In the afternoon cruise on the St. Lucia lake in search of hippos, crocodiles and many bird species. Dinner and overnight in the hotel in St.Lucia.

Day 7       Shakaland – Durban – Cape Town
After breakfast we leave St Lucia and on the way to Durban we stop in the capital of Zulu Imperium from the Shaka Zulu’s times: Shakaland. Afterwards we visit Durban – the harbour, city centre and the diverse ethnic and oriental stalls of Victoria Street Market where you can obtain curios, exotic foods & spices, and many other artefacts of special interest, Golden Mile – famous promenade with sandy beaches. In the afternoon transfer to the airport and flight to Cape Town. Dinner and overnight in the hotel in Cape Town.

Day 8       Cape Town – Cape of Good Hope
Full day excursion to the Cape of Good Hope. Scenic drive along the Western coast via small picturesque fishing harbour of Hout Bay where we go on a cruise to Duiker Island – seal and seabird colony. Later we continue our drive through Chapman’s Peak, a 10-km stretch blasted into the partially vertical rock considered one of the most spectacular coastal roads in South Africa. It starts at the Hout Bay and then winds up to Chapman’s Point, revealing breathtaking views of the sandy bays down below, until the road reaches sea level again at Noordhoek. Afterwards visit to The Cape Peninsula National Park that contains beautiful coastal scenery, beaches, diverse plant and animal life, shipwrecks and dramatic mountains. Wildlife in the reserve includes baboons, buck of all sorts and wild cats. There is also an abundance of birdlife including ostriches and flamingos. The park is the smallest of the world’s six floral kingdoms, and has one of the highest concentrations of different plant species, some of which are found nowhere else in the world. The special vegetation of the region is called “fynbos” and includes the Protea which is a South Africa’s national flower. We reach the Cape Point and use a funicular that leads up to the historic lighthouses built at the end of the Point. This is a stunning place to look out over the cliffs, rocks and endless sea. The smell and sight of huge waves crashing into the rocks is really spectacular. In the afternoon return to Cape Town along Eastern coast and old colonial resorts of Muizenberg and Simonstown. We will also stop at the Boulders Beach with a large breeding colony of Jackass penguins. This endearing little creatures nest just above the beaches along the coast, so one can well experience an encounter with some of them whenever enjoying the excellent sunbathing or swimming anywhere along Simon’s Town’s coast.
Dinner in the restaurant. Overnight in the hotel in Cape Town

Day 9     Cape town – Stellenbosch
After breakfast, if the weather permits, ascending by the cable car to the top of Table Mountain to admire unforgettable panoramic view of Table Bay, Robben Island, Atlantic coast and most spectacular Cape Peninsula. Thereafter excursion to the famous Cape vineyards. Drive through the picturesque valleys of Stellenbosch, Paarl and Franschhoek. The Stellenbosch Wine Route is arguably the country’s most famous, and the Stellenbosch Wine area includes over 300 wine farms of which more than100 are open to the public. We will taste South African way of life by visiting one of the wine estates, touring of the farm and wine tasting. Afterwards we will go back to Cape Town to Waterfront for a sunset cruise (in case of a bad weather we will visit Two Oceans Aquarium).
Dinner in the restaurant in Waterfront. Overnight in the hotel in Cape Town.

Day 10    Cape Town
After breakfast sightseeing tour of the city centre, colourful malay area Bo-Kaap, Greenmarket Square, Kirstenbosh, Union Buildings. Late in the afternoon watching the most stunning sunset at Signal Hill with a panoramic view of the Mother City will conclude the tour.
In the afternoon transfer to the airport for your international flight.

– 9 nights of accommodation in the hotels 3 * – 4*
– All breakfasts and dinners according to a program;
– Transportation during the whole tour in an air-conditioned minibus/bus;
– English/multilingual speaking guide services