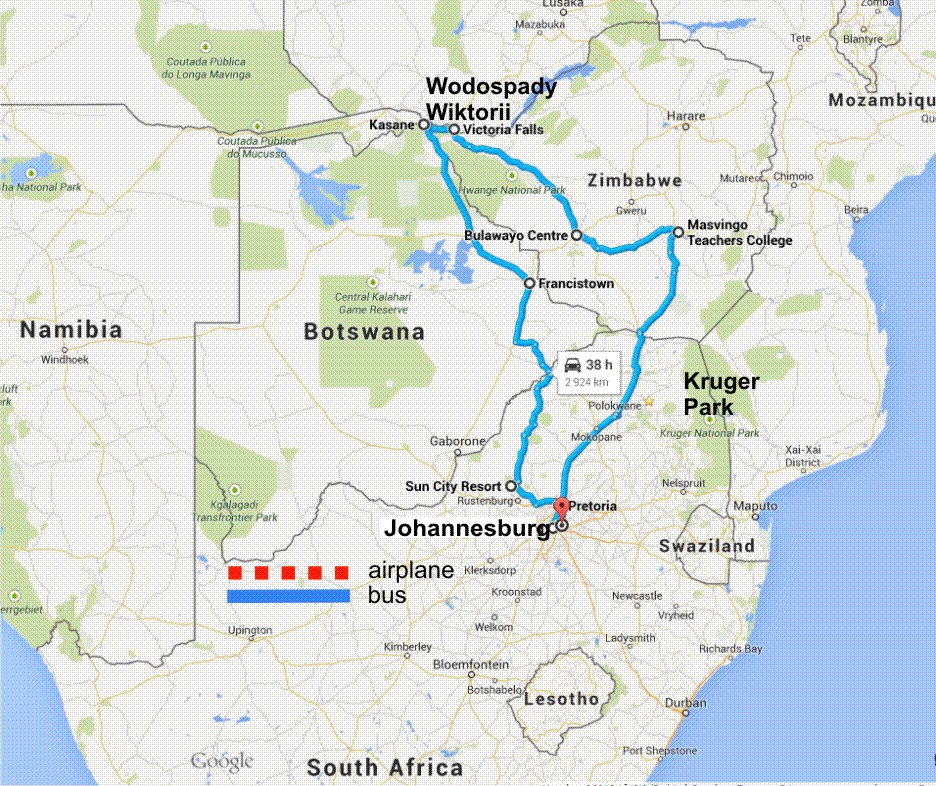 D1       JOHANNESBURG – SOWETO        (140 km)
Arrival in Johannesburg. Sightseeing of the city – drive through the oldest colonial districts of Johannesburg: Houghton with Nelson Mandela’s house, Parktown, the City centre and Soweto. In the afternoon we stop in Sandton – the most modern part of Johannesburg. From there we drive to Lion Park – a small private reserve where we will see few families of lions, cheetah and African wild dogs. After a short safari opportunity to take photos with lion cubs and to feed the giraffe.
In the evening dinner at African restaurant Carnivore and overnight at 4* hotel in Johannesburg.

D2       JOHANNESBURG – MESSINA – ZIMBABWE      (550 km)
After breakfast we travel towards Zimbabwe. This route, historically called Great North Road linked all former British protectorates. It starts in Durban and continues through Johannesburg, Pretoria, Harare (former Salisbury), Lusaka to Dar es Salaam. On the way we pass small towns that were created next to the non-ferrous metal mines, coal mines and quarries. After driving through the provincial capital of Limpopo: Polokwane, we will stop at the Tropic of Capricorn. On the way we travel over the scenic Venda hills to arrive in Louis Trichard, afterwards we drive over the picturesque Soutpansberg mountain range. Just after the mountains we meet the first baobab trees and stop for the short photo-session next to the famous, lying baobab. Later we drive through Mussina and cross the border with Zimbabwe on the Limpopo River. Dinner and overnight in the hotel in Beitbridge.

D3       BEITBRIDGE – GREAT ZIMBABWE – BULAWAYO (290 km)
Our first stop today is Masvingo – formerly Fort Victoria – one of the first towns founded in Zimbabwe by Europeans. Not far from the Rhodes’es Fort we can see the ruins of Great Zimbabwe, which gave the name to the independent ( 1980 ) country. Extending over 2.7 sq. km this UNESCO World Heritage Site is the oldest and the biggest, highly delveloped stone-built structure in Southern Africa. It was constructed in the thirteenth and fifteenth centuries during the reign of Mutapa dynasty.
Dinner and overninght in the hotel in Great Zimbabwe.

D4      BULAWAYO – MATOBO HILLS  (350 km)
After an early breakfast we drive through the bush covered hills of central Zimbabwe to the former capital of the Matabele Tribe: Bulawayo. We visit the city centre with well-preserved examples of Victorian architecture. In one of the most interesting Railway Museums in the world we admire a wonderful collection of steam locomotives, and a private parlour car of Rhodes. In the afternoon we drive to the Matobo  Reserve with incredible hills – completely bare rocks shaped like bald heads. We may see wildebeest, tsessebe, impala, kudu, zebra and giraffe. Cecil Rhodes admired the Matobo Hills and often spent time there delighted by unique views from its summits. He renamed it from “Hill of Ghosts” to “View of the World” and exactly there he wanted to be buried. We will visit his grave on top of the highest hill  After sunset we drive back to Bulawayo.
Dinner and overnight in the hotel in Bulawayo

D5       BULAWAYO – HWANGE  (333 km)
Early morning we depart from Bulawayo to the northerly direction, through Matabeleland towards the largest game reserve in Zimbabwe – Hwange. A very interesting part of the route passes through the hills decorated with baobabs. After lunch in Hwange (not included) and a short break we depart for an afternoon safari in 4×4 in Hwange. The reserve is famous for its huge amount of wildlife, particularly large population of elephants, zebras, giraffes and rhinos. Rarely visited, it boasts one of the largest herds of elephants in Africa. After the unforgettable sunset in the bush we drive to the lodge. Dinner and overnight in the lodge in Hwange.

D6       HWANGE – VICOTRIA FALLS  (191 km)
After breakfast we leave the reserve crossing the famous Rhodes railway line from Cape Town to Cairo, but eventually built only to the Copper Belt in Zambia. On the way we pass the town of Hwange which is situated near the coal mine and power plant. We arrive in Victoria Falls around lunch and check in at the hotel. In the early afternoon we see the main purpose of our trip, the legendary Victoria Falls. We visit the reserve and walk to the railway bridge linking Zambia and Zimbabwe. After a short rest at the hotel we depart for the traditional African dinner at Boma restaurant where we will see tribal dances and will learn how to play the drums.
Overnight in the hotel in Victoria Falls.

D7       VICTORIA FALLS
The day for optional activities. Most of the activities depend on individual choice and are not included in the price of the tour. One of the most popular attractions is the white water rafting over the gorges of mighty Zambezi below the falls. The rafting offers grade 5 rapids most of the way. Other attractions are: bungi jumping, helicopter flights over Vic Falls, elephant back safaris or walks with lions. Dinner and overnight in the 4* hotel in Victoria Falls.

D8       VICTORIA FALLS – CHOBE (BOTSWANA) (120 km)
After an early breakfast we drive through the Matetsi reserve towards the Botswana border. After the border we pass the place where borders of 4 countries cross (Zimbabwe, Botswana, Zambia and Namibia). After arrival at the lodge we start our 4×4 safari in the famous Chobe National Park. After lunch (not included) and a short break we depart on the boat safari along the Chobe River. We watch herds of elephants and antelopes, giraffes, zebras and warthogs coming out of the bush to the water. Along the riverside we pass families of hippos and crocodiles basking at the water’s edge. Great opportunity for unique pictures of animals, as well as the incredible sunset.
Dinner and overnight at the lodge in Kasane.

D9     KASANE – NATA – FRANCISTOWN               (577 km)
A day dedicated to drive through the North Eastern part of the Kalahari Desert to the village of Nata, located on the edge of the salt lake Sowa. In the afternoon we arrive to Francistown.
Dinner and overnight at the lodge in Francistown.

D10     FRANCISTOWN – MARTIN’S DRIFT – SUN CITY   (585 km)
Leaving Francistown we drive towards the South African border. We cross the border in Limpopo and afterwards we stop for lunch (not included) in Lephalale. In the afternoon we travel the lands of northern part on South Africa – Limpopo province, covered with endless bush and farms for mainly grazing cattle and breeding wild animals for private reserves. In the evening we arrive at our hotel near famous Sun City.
Dinner and overnight at the hotel.

D11     SUN CITY – PRETORIA – AIRPORT   (200 km)
In the morning we visit Sun City – the place of entertainment and gambling – African Las Vegas. The Sun City resort is nestled on the border of the Pilanesberg National Park. We will visit the complex and Lost City, surrounded by stunning tropical gardens with romantic waterfalls. Afterwards we drive to Pretoria – sightseeing of the city centre with its historical Church Square, the old Parliament Building, Palace of Justice and the Paul Kruger’s statue, City Hall and Melrose House. We also stop at the Union Buildings, the main quarters of the South African Government, situated on top of the hill, surrounded by beautiful gardens with panoramic view of Pretoria.
In the afternoon transfer to the Johannesburg airport for your international flight.